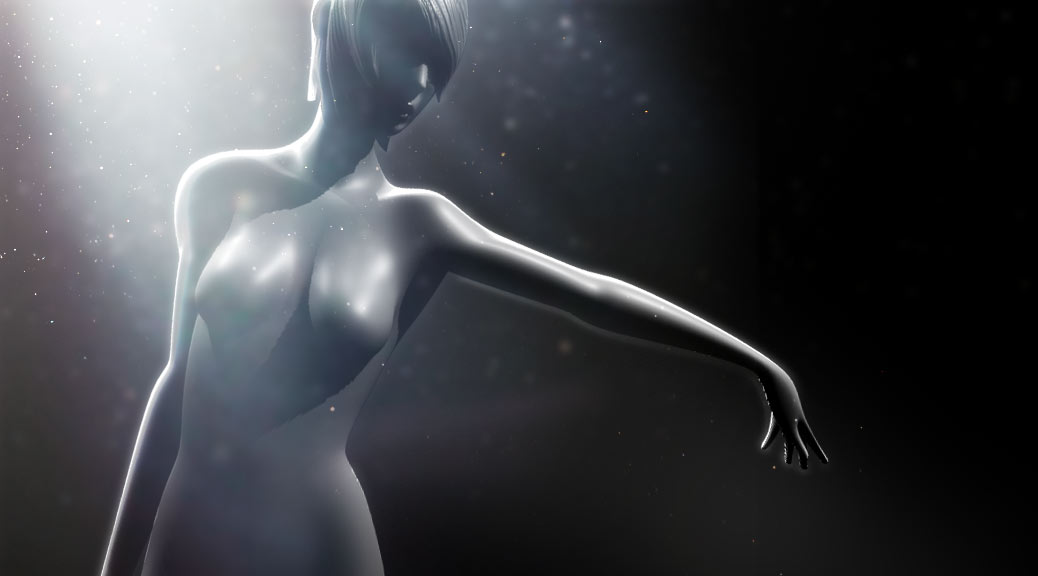 The common thinking is that starting with a T-Pose for characters is the best way of building a model. However, after years of experience, I don’t use a T-Pose any more.  In fact, I think modeling in a T-Pose is a terrible idea, and results in characters that don’t look right or deform correctly. Why?

Consider how often you walk around with your arms held out to the side. Never! Unless perhaps you are a soccer player doing the airplane thing after scoring a goal in the World Cup.

In general, we want to model our character in a pose that is as close as possible to their most common action – for most people, that is walking or standing, arms at the side, only occasionally bringing the arms up.

True, there are times when the default arms-at-the-side look isn’t the best choice. For example, I worked on a game called Stranglehold. The game’s protagonist is dual-wielding pistols the entire time: arms held up in front of the character. In this case, the default pose for the character model was closer to that posture – arms up and held forward.

In another case, working on the basketball title NBA Ballers, the characters’ arms are almost always up – so modeling the arms held up and out to the front – or even stretched up over the head – could be helpful.

But: there is no real situation where an actual t-pose is called for. So why is it so common?

It makes the technical tasks easier, at the expense of the artistic tasks

The balance between technical and artistic is a battle that every 3D artist faces. With characters, the battle is between topology and character setup (the technical stuff) versus anatomy (the artistic).

Creating in a t-pose makes creating topology more difficult in the arm area. But at first glance it seems easier – the body and the arm are nicely separated, so everything is easier to keep track of. And we end up with nice parallel rows on the arm that meet perpendicularly with the torso.

The problem is that this layout doesn’t work well when the arm comes down. Those nice parallel rows get squished into the armpit. And this layout also completely ignores the fact that the arm doesn’t connect to the body like that at all – it connects at more of a right angle.

The second issue is posture – when arms are raised up, not only does the arm come up, but the clavicles lift as well. Try this: put your left hand on your right shoulder. Now raise your arm up to horizontal. You should feel your clavicle lifting as well.

It’s not just the arm that is moving. The entire upper chest and shoulder region is deformed! Using a t-pose for characters means anatomy is being modeled in an extreme pose, instead of a resting pose.

Everything that comes after will be affected – for example, when we sculpt, we have to sculpt in the arms up pose, which dramatically changes the positions of the clavicles and the pectorals. It also stretches the deltoids and the latissimus dorsi. All of which change when the arms come down!

Since our character spends most of it’s time in the resting pose, our work should reflect that – we should model and sculpt for that resting pose.

When the arms are up and our shoulder rows are spread apart, it is relatively easy for the character setup artist to grab those rows and apply skin-weights.

When the arm is down, there is generally a lot of interpenetration between the arm and the torso. This means the rigger has to work harder to sort out which vert goes where!

However, the end result is what counts. No one looks at a game or a film and says, ‘wow, that character sure looks like it was easy to setup!’ If it takes a few extra steps to get to a better result, so be it.

In some situations, like Maya’s HumanIK rigging solution, a t-pose is required. In which case, I still model in the base pose, and then rely on breakbinding later to create the t-pose (see inset).

A breakbind is a solution where the character is modeled in one position – for example, with arms down – and then is quickly rigged and the arms are rotated up, into a three-quarters pose.

The model is then detached from the skeleton, and the character artist does a modeling polish pass to make the new mesh look correct. Once that’s done, the model is setup again and finalized.

The other problem we run in to is with animation. We want to model our character looking as anatomically correct as possible, including a neutral posture. Animators will tell you they want a rigid default pose, so that posture can be added later via animation. This means that some animators will request a character be in a t-pose as the default.

Just as the animator’s job is to create good animation, a character artist’s job is to create a good character. To that end, I would rather create the proper posture and anatomy upfront, and let the setup artist worry about creating a more neutral default pose via breakbinding.

So, what should be used instead of a T-Pose for characters?

I compromise between proper anatomy and topology, but I prioritize anatomy.  Like I said, as a character artist, my job is to make the best looking character. The character TD can worry about setting it up!

I prefer to model my characters with their arms at their sides. This will capture the most natural default pose.  After base modeling is complete, I raise the arms up slightly, so they are held away from the body. In general, I also bend forward a little bit at the elbows. This creates a natural, relaxed looking posture.

The end result should be a more natural looking character model, which is our ultimate goal!

7 thoughts on “is a t-pose for characters a good idea?”