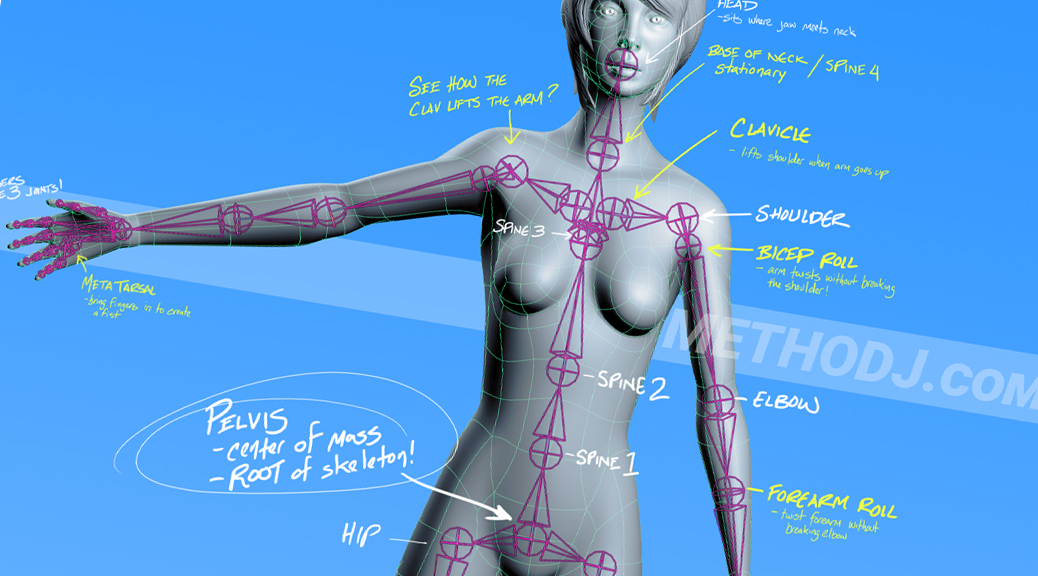 Want to know how to place joints correctly? Looking for an explanation for Maya’s skin weighting tools, like the new Geodesic Voxel bind method? Want a cheat sheet for bone placement? Keep reading!

How to rig in Maya: the video

Creating joints is easy enough – we just use the create joints tool in our orthographic camera. The real trick, of course, is knowing where to place them. Joints don’t behave like our joints and bones.

For example, to capture the movement of the shoulder, muscles in the chest, back, and shoulder have to move in sync. A single Maya joint can’t capture a system that complicated!

What we have to do is a kludge – we create joints in places where people don’t have any. These are joints that sit in the middle of the femur, or the humerus! What are these?

The key thing to remember in Maya is that joints aren’t bones – not human bones, I mean. They don’t behave like our skeleton, even though joint placement usually mimics our skeleton closely.

The difference is that joints are just a point in space, and the verts that are weighted to that joint just rotate it around it, like so:

the verts just rotate in a circular motion around the joint – exactly like the rotation gizmo itself, when we use the rotate tool. This is quite different from how our real bodies move!

This means that we have to fake a few things to get our 3D skeleton to animate like a real human body.

For example – here is an arm with helper joints, and one without:

Both arms are twisted in a left to right motion. The upper arm, with the helper joint, looks fine. However, the arm without the helper bone deforms very poorly in the elbow area – not to mention that elbows can’t rotate side to side like that!

So the helper joints (usually roll bones) are placed in areas where Maya’s simple joints simply can’t move correctly. For example, there is a roll bone in the forearm, because that is the easiest way to capture the movement of the ulna and radius bones. We see similar joints in the bicep and thigh areas.

14 thoughts on “how to rig in maya: joints & skinning”