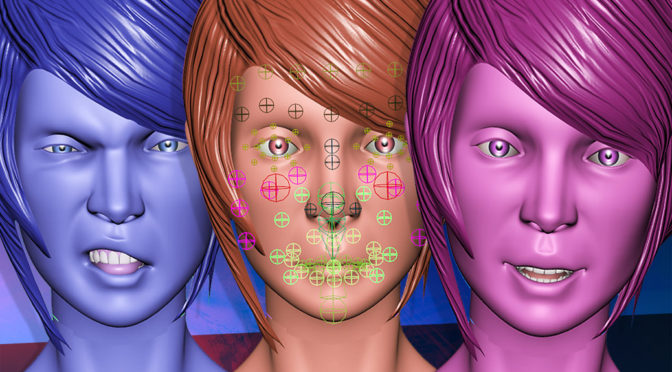 Setting up a character’s body is one thing – but Maya face rigging is on a whole other level! It isn’t uncommon to have more joints in the face than in the rest of the body combined. In fact, you may end up with double or triple the number!

So how do we handle the complexity of all those joints, and the accompanying skin weighting issues it brings?

Step one is making a good model. Your character’s face must be topologized properly to work WITH the face joints. My character face modeling tutorials go over this in-depth! Or see the extended cut here.

is step two. In my previous character setup video, joints are placed on actual joints of the body, like the elbow. This is different from joint placement for the face, where joints are placed along areas of motion on the face.

This is more confusing than joint placement on the body, because there are no obvious joints on the face. The face is made up of overlapping muscles that move in concert. Unlike the body, our Maya joints won’t try to mimic actual joints, like an elbow or an ankle. Instead, we will place joints in clusters, designed to replicate the movement of the facial muscles.

is step three for Maya face rigging. Once our joints are laid out, we attach our character’s face to the joint with geodesic voxel weighting. Of course, the default weighting will be terrible, so we’ll have to adjust them significantly.

The trick is that we need to see the face in motion, to test the skinning. So we have to pose our character’s face by moving the joints, and then adjusting the skin weighting based on what we see.

The Maya face rigging process has a LOT of back and forth. Pose the character, adjust the weighting. Adjust the joints based on the new weighting. Tweak the weighting based on the new joint position. Create an entirely new facial expression and repeat the process again. Iterate iterate iterate! The YouTube video shows the creation of one expression, but the extended cut shows the creation process for ALL the emotion expressions.

The face is a hard area to get correct. Making it emote convincingly is especially difficult. If you’ve never done it before, be prepared to spend days or weeks (or even months) tweaking!

Here’s the video! Keep reading after for more info.

A common question for Maya face rigging is whether to use joints for facial animation, or blendshapes. What are the pros and cons of each? I’ve answered this question previously, but let’s break it down again!

The advantage here is flexibility. With joints in place, properly skinned to the mesh, you can create an almost unlimited variety of expressions. What’s better, you can create new expressions on the fly, if your project suddenly changes direction.

The downside is the time-consuming setup process. Placing individual joints, and tweaking the skin weighting, takes a long time. Iteration!

This downside can be minimized if you have a script that automates the rigging process, of course. I worked with a technical director who specified characters be created using a specific poly and UV layout that couldn’t change – because the script used the UVs to automatically place joints and skin the face. Very fast – once the original time-consuming setup and scripting work was done.

The advantage here is usually simplicity and the initial setup time. Let’s face it – character setup is a technical task, and not every artist is wired for that. Blendshapes (aka morph targets) allow the artist to create new facial shapes using regular modeling and sculpting tools. This can be fast and intuitive! Knock out a few blendshapes and you’ve got an animating face in the time a setup artist takes to just layout all the bones.

The downside is twofold – blendshapes lack flexibility. You need to create almost every face from scratch. Some can be blended, but you can’t count on it. If something new pops up mid project, you may find yourself creating blendshapes indefinitely!

The other downside is workload and time. If you need a lot of facial animation targets, creating all of them can be time-consuming.

When to use joints versus blendshapes?

If you need a robust solution for a primary character, that needs to speak and emote, go with joints.

If you need a character that just makes a few faces, speaks in a limited capacity, and in general doesn’t do as much facial animation, blendshapes are probably a better bet.

Joints used to be the only solution available to game artists. But game engines are starting to implement blendshapes more robustly now. Follow the rule of thumb above and you’ll be in good shape!