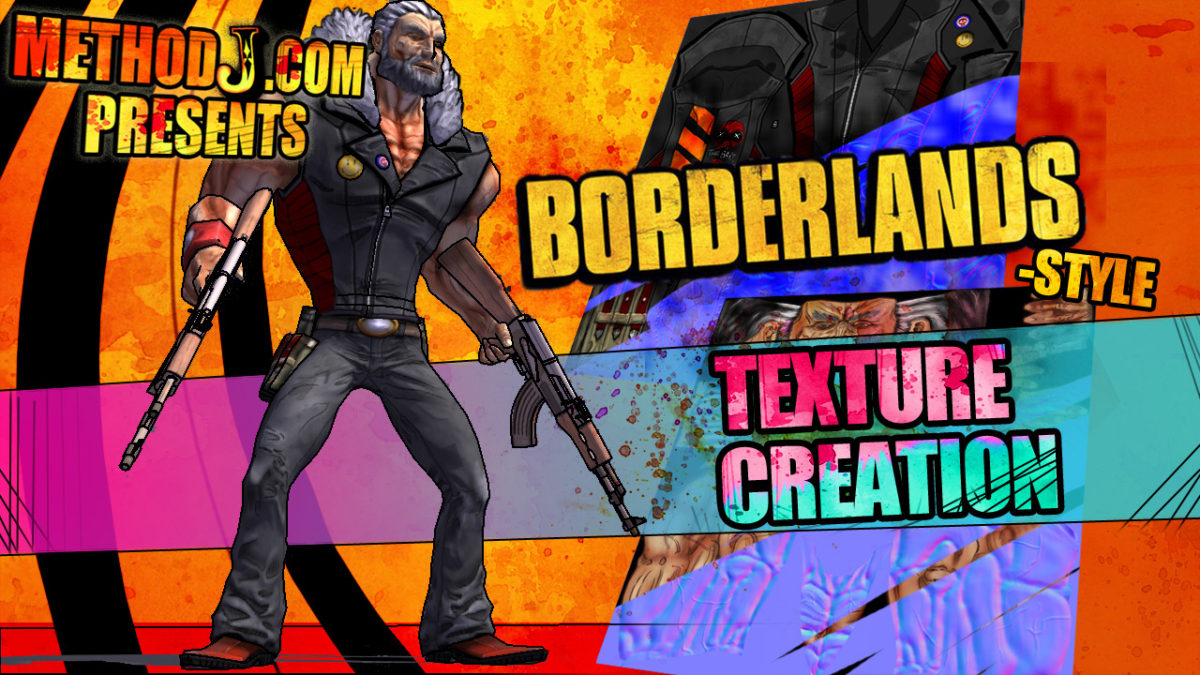 Ever wondered how to reverse-engineer the art that goes into AAA games? Follow along as I describe my process

I’ve created a video version of the tutorial! Check it out!!

Borderlands has an interesting art direction style, one that is easy to see and to talk about. I created the guy below in class as a demo of Borderlands style texture creation. (By the way, you can click on the images in this post to see them at full size.)

What a swell guy. If we take a look at his base geometry, though, we see he is pretty low-res.

And what’s more, he didn’t need a lot of sculpting detail, either. I know from seeing the Polycount art dump of Borderlands that their artists created some fantastic high-res sculpts for their characters. For primary characters like Roland, Jack, or Axton, spending that kind of effort and detail really pays off.

But for other characters, like, say, a bandit who will be gunned down in a few seconds, who won’t be a talking NPC, we can get away with less detail.

For my character, I didn’t find that sculpted detail to be necessary, and I was able to create the most of the detail in the diffuse texture map.

I started with the pants. I had shot texture reference of these leather pants in a studio, and for my first attempt, I projected them on to my base geometry to form a basis for my texture.

Next, I processed them in Photoshop, looking for a quick solution. Searching the web, it seems like everyone tries to take shortcuts with the BL art style.

The main misconception is that Borderlands is just a simple cel-shaded art style, and that reducing a photo to a few flat colors with some outlines will do the trick.

Naturally I thought the exact same thing at first! I used the Cutout filter and ended up with this.

The Cutout filter definitely simplified my photoref texture, but it also produced a pretty noisy texture that didn’t read right.

I tried cleaning it up by hand-painting parts of it to sharpen up the shapes, but also to add a bit more value contrast. Notice that the previous image has only two or three distinct values, whereas my new painted version has a few more brights and darks.

I played around with that style for a while and became sidetracked, eventually painting a texture that looked like this.

Obviously the wrong direction. I found myself stuck on the clothing of the character, so I turned instead to the base anatomy.

Still, I spent a bit of time on that sidetrack, eventually sculpting the character to match that texture style.

While I may have wasted time, the muscle detail I created for his arm really helped when creating the BL-style textures. So at least there was some benefit to the sidetrack.

I used that sculpt detail and created a crevice map, painting all the low points between muscles with dark, and brightening up high points to show off striations or bones. I ended up with something like this:

Once I had that, I started experimenting with the distinctive Borderlands outlines.

The sketchy lines on the characters remind me more of comic books than anything, so I started creating a comic-book-style musculature.