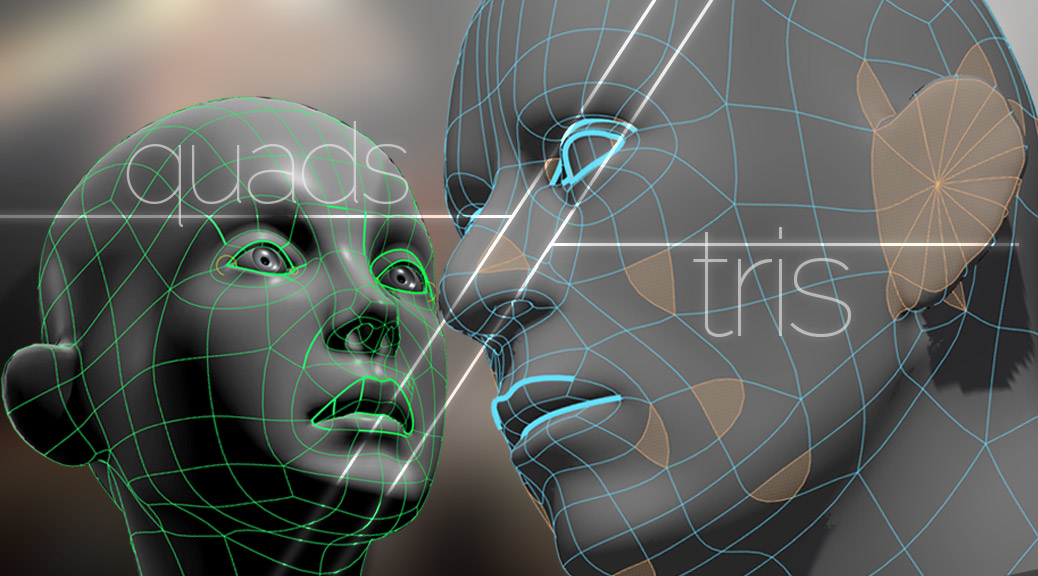 So: why are triangles bad when poly modeling? This is a common question posed to me. And if you’ve watched any of my videos, you know I use tris from time to time. But a lot of people will tell you they should always be avoided. What’s really going on here?

Why are triangles bad compared to quads?

Talk to a graphics programmer sometime and try asking for a poly budget for your game art – they will often give you an answer in verts, not quads, or even tris.

The truth is, computers think in terms of verts. Quads and triangles are there for us – the artist!

Quads are for the artist’s convenience

Quads are easier to see and understand. Our eyes can make sense of parallel and perpendicular rows very fast. And modern modeling tool sets take advantage of all those parallel rows of edges to do neat stuff.

But to a computer, there is no such thing as a quad. There are just two connected triangles, and the software simply doesn’t draw the interior edge. The edge is invisible to us, but there is still an edge there!

Triangles are convenient, too

A completely quadrangulated mesh is easier to take in at a glance. Conversely, all the zigzag lines of a fully triangulated mesh make it much more difficult to read. So quads have some obvious benefits.

But making a completely quadded mesh can be difficult and tedious. Triangles are usually a quicker way of resolving that kind of problem. The occasional tri can be a huge time saver!

But – triangles can cause problems in certain circumstances.

So how do we know when it’s OK to use them? Why are triangles bad? Here are rules of thumb that I use to judge when it’s appropriate:

Quads vs Tris – what’s the verdict?

Use whatever works. Quads are the default. But feel free to use triangles when you need to use them. There’s no hard and fast reason to say that you should never use a triangle. Sometimes it’s just easier!

4 thoughts on “Why are triangles bad when modeling?”